The Barn Owl has a very distinctive look to the fact. You will notice that almost all species of owls out there have a rounded face. However, this one has a heart shape to it that is very endearing. The colors are light brown mixed in with dark brown. They also have white coloring around the front of them and some gray mixed into the body.

They are small owls with an overall size of about 22 inches in height. The females are often several inches taller than the males. They are also rounder around the middle area yet they don’t weigh much more. The wing span of these owls is about 45 inches.

The talons on the Barn Owl are extremely sharp and they have a significant difference from other species. You will notice that they are serrated which allows them to be able to move them freely from each other. It also gives them an additional line of defense should they need to defend themselves against predators. They have wings that are designed to offer them a silent flight ability. This makes it much easier for them to find their prey and to sneak up on them.

Some people find it peculiar that the Barn Owl has one ear that sits up higher than the other one. While it is an unusual sight there is a use for this part of their anatomy. Remember the old rabbit ears that used to be used for signals on TV’s? The ears allow for a type of 3-D radar system to be in place. This is how they are able to hear even the slightest of movement among their prey. These owls have very good eyesight too that makes hunting simple for them. 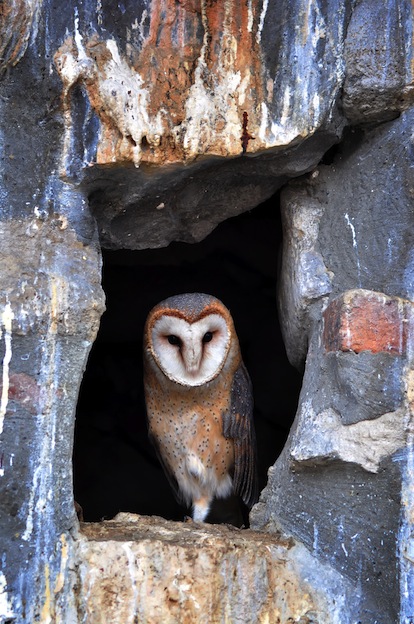 Fossilized remains of the Barn Owl have been identified that date back 5.5 million years ago. The information that has been gathered from them gives as some exciting details about these owls long ago. The bone structure of them shows that the Barn Owl was more than twice the size back then as it is today.

We don’t know what changes occurred in order to make it a smaller size though. Perhaps it was a lack of food or so that they would be able to find shelter easier. These early fossils show that they were much bigger at that point in time too as far as their overall weight. The change in weight though could be what allows them to fly easier and to be silent hunters.

The sounds that come from the Barn Owl are very interesting. They can often be heard with hisses and whistling sounds. Sometimes they also offer what sounds like snoring too. It is very different from the hooting and calling that other species of owls are associated with.

In fact, many people don’t’ even realize they have Barn Owls around. The don’t see them during the day and they sounds they are hearing at night don’t remind them of the typical owl.

The Barn Owl is found in areas all over the United States. They have a very diversified type of distribution that often gives the impression that there are more of them out there than there really are. They do like the warmer areas though which is why you will find them around California and Arizona all year long.

The Barn Owl lives in many types of settings. They are well adapted to the densely wooded areas. However, they also like to be out in the open where they can find prey easily. These owls are able to take their surroundings and make them work for them to survive. It is amazing when you consider the diverse locations where they are able to thrive.

The Barn Owl consumes quite a bit of food on a daily basis. In order to do so they have to be very fast and very skilled. The use of their senses – namely sight and hearing allows them to have the upper hand. What they will feed upon really depends on the area where they live.

In most areas they are able to find plenty of rodents including mice and rats to survive on. Rabbits are another type of food that seems to be plentiful for them. They will also consume small birds and an array of different insects. The are able to hear the very low sounds of their prey moving around. This makes it virtually impossible for them to hide from the Barn Owl.

The sounds that the Barn Owl increase in volume and intensity when it is time for mating to occur. The males are the most vocal and are the ones that start the calling process. From there the females will respond back. The pair may be mating between March and May. The time of year will vary based on the climate in the given location.

It takes about 33 days from the time that the eggs are laid until they hatch. During that stretch of time the couple are going to do all they can to protect them. They take turns keeping the eggs warm and safe. While one sits with them the other goes to find food.

Finding enough food for the young owls after they hatch can take many hours each day for both parents. These young owls may eat their own weight daily and they grow rapidly. The amount of food they need at the end of the 4 months they spend with their parents is unbelievable.

When it starts to become too much for the parents they will start showing the young how to help hunt for their own food. This is necessary or they won’t be able to provide enough food for themselves and for their young. 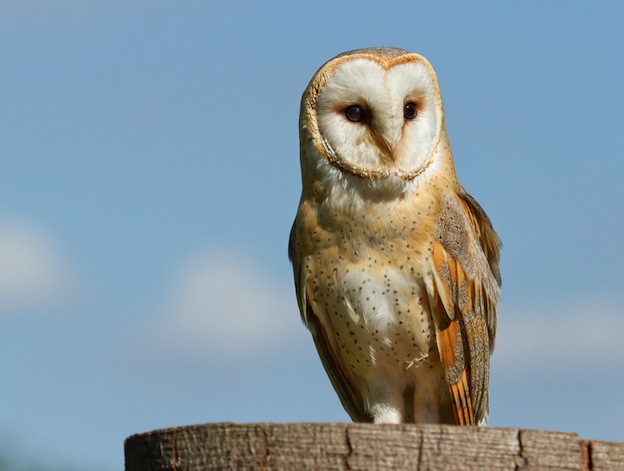 A barn owl in a german zoo

Once again location is a factor for the Barn Owl when it comes to the predators it will have contact with. In some regions the possum is one that will consume large numbers of them. In others, raccoons are a problem to be reckoned with. Both of these animals are night hunters too so they are out and about at the same time that the Barn Owl is looking for their own meals.

Smaller Barn Owls are known to be consumed by other types of birds. This includes eagles and hawks. They are also eaten by another species of owl called the Great Horned Owl. Snakes can be a problem for them in some areas too.

Humans are often living in the same areas as the Barn Owl and their pets, mainly cats, can be predators too. Humans have been known to hunt the Barn owl for sport. Sometimes they simply don’t want these creatures living around them.

Most of the time though is for the thrill of hunting them. It can be quite a challenge to find one. Mounting it as a trophy is a common way to show of the victory of such a sport as well.