One of the first things you will notice with the Barred Owl is that they appear to have no ears. They aren’t visible from the top of their head as they are with other species of owls. They are brownish in color as well as shades of gray. They also have vertical streaks of white across the chest region. They are about 24 inches tall and have a wing span of about 50 inches.

They have brown eyes which is quite interesting since almost all species of owls have yellow eyes.

The Barred Owl is found in quite a diverse number of locations. They are very popular throughout the United States. The majority of them do live around the Florida area. They are also heavily populated in areas of Canada and Guatemala. They usually live in heavily wooded areas. They also seem to prefer wet areas compared to dry climates. Some have even been identified living in the warm temperatures around Mexico.

However, they are also spotted in many open areas. Yet they don’t seem to live in these open spaces. Instead that seems to be where they prefer to hunt for their prey. They don’t like to hunt close to where they happen to be living. 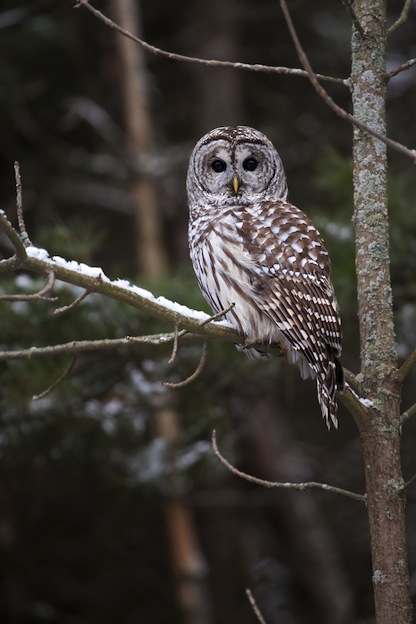 The Barred Owl is one that is more vocal that others. They tend to be hear quite often and even during the late afternoon on cloudy days. The sounds that they make often sound like a human saying “ who cooks for you”. They are very territorial and they don’t migrate so they will be in the same spot all year long. They will take any opportunity to use shelter that other birds have abandoned.

The Barred Owl has quite a diverse diet. They can be seen diving into the water to go after fish. They are also known to consume rodents, rabbits, squirrels, snakes, and snails, they will also consume other species of owls that are smaller than them in order to remain dominant in their environment.

When it is very cloudy outdoors they may be seen hunting in the early evening before it is dark. This offers a terrific opportunity to see them and to be a witness to how they hunt for their food. 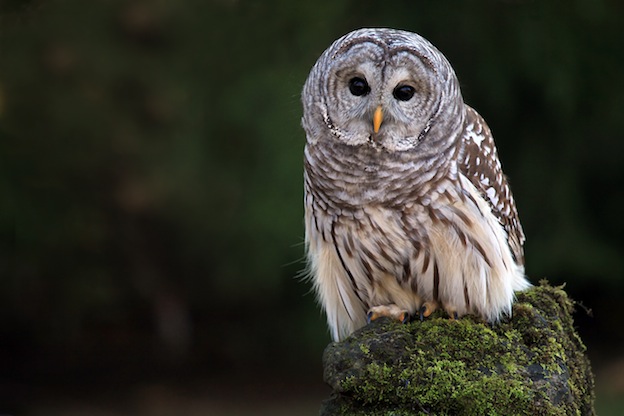 Mating rituals begin in January with the males calling out loudly to the females. They will preen each other as an indication that they agree for the mating process to take place. There are usually only 2 or 3 eggs laid at a time. The incubation period ranges from 21 to 28 days.

While the male does tend to the eggs while the female searches for food, she is the one that will spend the most time protecting them and keeping them warm. The young will be fed by the parents for the first month or so of life.  These young offspring are very vulnerable at that time because they can’t fly.

Instead, they climb out of the nest and they sit on branches. Here their parents will continue to bring them food as long as there is enough to go around. This will continue until these young birds are finally about to fly. They can live about 20 years in the wild, and 28 years in captivity.

The pairs often will mate again each season for the rest of their lives. They will also use the same nest year after year to raise their young in. This is why it is so hard for them to continue mating if their natural environment has been destroyed due to the efforts of humans.