The smallest owl found in North America is the Elf Owl. It is only about six inches tall when it is fully grown. The wing span for this small owl is about 14 inches wide. In fact, when full grown they are often mistaken by observers as young owls. The feathers on it are very puffy giving it a swollen appearance. The overall coloring is a light brown but with darker brown patterns on the belly area.

The Elf Owl also features white areas above the eyebrows. This is a unique look along with the yellow eyes that it has. The head is very round and there aren’t any visible ears. The bill is a shade between green and yellow so the overall appearance of this owl is very unique.

This particular species of owl is comfortable living in the hot desert terrain. These areas are covered with cactus. They range in elevation from 2,000 feet to 7,000 feet. However, some of them are found in wooded forest regions. What is interesting is that they won’t reside anywhere around pine trees.

The Elf Owl can be found making its home in a variety of habitats. Among them are mountain ranges, canyons, and ravines. Some areas where they live include Arizona, New Mexico, Texas, and California. They will migrate mainly into Mexico during the winter months.

What is known though is that they do have a need for water. They will often find these desert areas that also have some water around them. Nevada is one such location where there are now more Elf Owls than ever before. 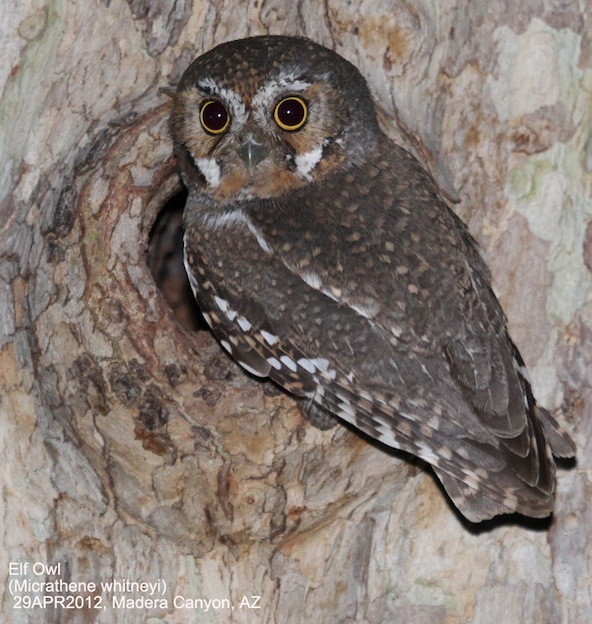 The sounds from the Elf Owl are very high pitched. The offer sounds that are similar to whistles and squeaks. They are very good at hiding in plain sight. When an Elf Owl senses danger it will try to camouflage its body against a tree in various positions. It is often very successful as portraying itself as a broken branch. If that isn’t successful then they will take to flight as fighting isn’t in their nature.

The Elf Owl has lots of different types of foods that it will consume. Insects and scorpions make up the majority of it. They are also known to eat small birds and lizards. They primarily eat invertebrates including crickets, moths, centipedes, and even beetles. They don’t seem to be bothered by the fact that the scorpions or centipedes can sting them.
While the Elf Owl can see well in the dark, they don’t have the complete night vision as many other species of owls do. Therefore they rely upon their hearing more than sight when it comes to finding their prey. They have the element of surprise on their side so they usually have the prey under control before it has any time to retaliate.

The only nest from 15 to 35 feet off the ground so they are often more vulnerable to predators than other species of owls. The females will lay from 2 to 4 eggs at a time. The incubation period is about 24 days. The young will only remain in the nest for about 30 days after birth.

The live span for the Elf Owl is very short compared to other species. In the wild they can live about 3 to 6 years. They do live longer in captivity with an average of about 6 to 10 years.  Due to their small size though these owls often find themselves as a meal for various predators. Among them are various large cats, snakes, and even other species of owls.