How much do you really know about the owl? They are easy enough to identify, but as you go through these facts you will begin to learn a great deal about them. There is a good chance that you don’t know very much about them, but don’t worry because that is all about to change for you.

Owls are believed to be among the smartest of all birds.

Owls are almost always nocturnal which means they will only be active at night. It is very rare that you will see one during the day.

The female owls of almost all the species are about 25% larger than the males.

Even though there are many species of owls there are two main categories – typical owls and barn owls.

Owls have exceptional vision that allows them to be very good hunters. They also have very good hearing.

The beaks of owls are very small but they are also very powerful. They help them with controlling prey as well as a way to fight off predators.

Owls are able to fly silently.

Antarctica is the only place in the world where there are no species of owls found.

Owls are usually solitary creatures unless it is mating season. However, some of them do roost in pairs or in small groups.

Preening is a daily ritual when an owl wakes up. This grooming process can last for several hours.

Owls have been known to attack humans when they feel threatened. This is especially true when they have eggs to protect or young offspring that they are caring for.

Owls take baths in the rain as well as in shallow water areas.

Hooting is the most common type of vocalization that owls are associated with. However, they also whistle, purr, and hiss.

Owls are very territorial and they will fight with each other for the right to remain in a given location. During mating season and when food sources or shelter are hard to come by that fighting will increase.

It isn’t uncommon for owls to be attacked by flocks of other birds. On their own, these other birds are intimidated and will fly away.

Owls usually don’t leave their natural environment to go to warmer climates in the winter time. Some species do migrate but overall they will stay in the same location all year long.

The owl is the only species of bird that doesn’t have a crop. This is a sac that allows food they 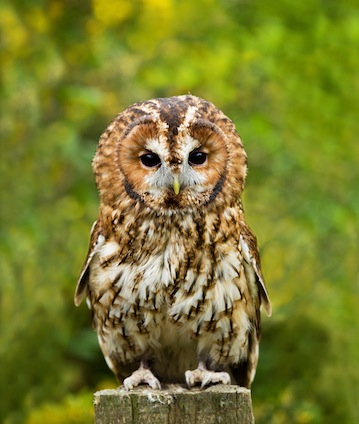 consume to be stored in an area for later on, with some of it being passed on for digestion. With the owl all that they eat is immediately part of the digestive process.

Owls have 14 vertebrae in their necks which is why they are able to turn their heads all the way around.

Owls have three eyelids that protect their huge eyes.

There are five types of feathers on an owl – contours down, semiplumes, bristles, and filoplumes. All of them are specially designed to offer the owl the best overall functioning. Some of them are very sensitive and allow them to feel their surroundings through them.

Once a year the feathers of an owl will be completely replaced. This process is known as molting. This shedding and regrowth process will take about three months to be completed. The abilities of the owl aren’t bothered though because the feathers fall out and regrow in small sections.

In some species of owls the feet are also covered with feathers. This helps to keep them warm during the colder part of the year.