The Great Grey Owl gets its name from the dark and light patterns of gray coloring on its body. It features a tail that is much longer than most species of owls out there. It also has one of the largest heads. There are some distinct characteristics of its appearance. For example it looks like it has a white moustache. It also looks like it has a black bow tie. They also feature areas of white that are on the side areas of the eyes.

The Great Grey Owl is found scattered around North America. They can be found in areas of Alaska and Canada. Many of them are found around Lake Superior. They tend to move in a Southern direction in the colder times of the year. However, they will also venture West when they feel that their food sources are too scarce in their current location.

Along the Sierra Mountain range of California that has recently been a number of Great Grey Owls located. There are approximately 100 of the now but they aren’t native to this area. It is believed that they moved for food and decided to stay in that area as it offers them all they need for survival.

These owls tend to like living close to the swamp areas. They also will be found in forest areas where there is enough moisture. They are also found around farm land but that is mainly when they are enroute to their migration location. 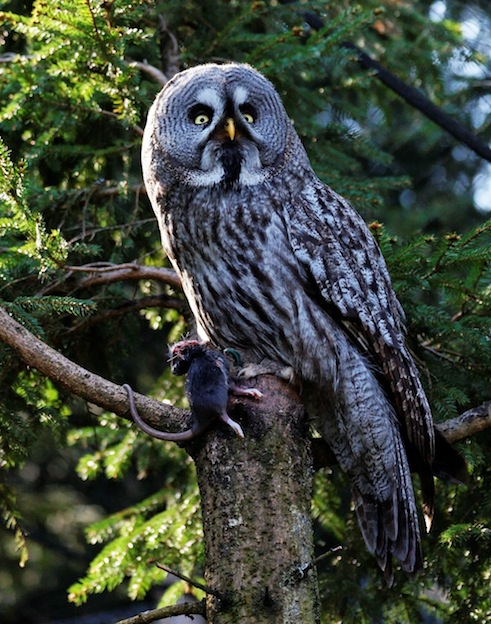 It is very rare that you will hear vocalizations from the Great Grey Owl. The one time when they can be heard with hisses, clicks, and hooting is when they are looking for a mate. They also seem to do so when they are carrying for their young.

They aren’t deemed as being migrational birds but rather nomadic. The difference is that they move based on their needs being met and not on the seasons as most birds do. For most of them though some movement is necessary at different times of the year.

Birds and small mammals make up the diet for the Great Grey Owl. They are exceptional when it comes to hunting. They are also going to feed on just about anything they can find in order to be able to survive. 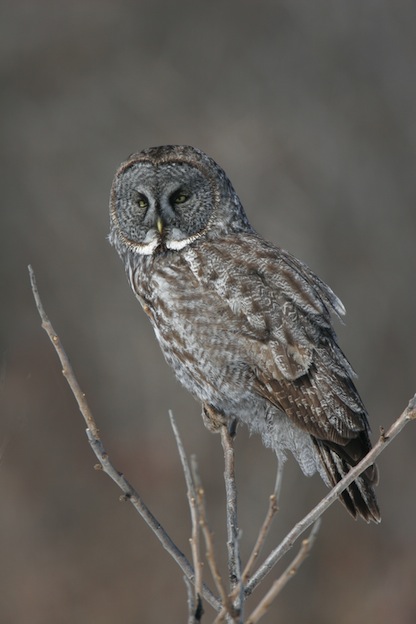 Great Gray owl on a branch

The females will lay up to three eggs with about a day between each one being delivered from her body. If she has had access to enough food then she will likely have three eggs. One or two eggs though often means that food is hard to find. This is a natural part of the reproduction process for the Great Grey Owl. It helps to keep the population under control when basic needs can’t be met.

While this is a great balance by nature it also means it is hard to get the number of these owls to increase. In many areas where there were once large numbers of the Great Grey Owl, very few remain.

In many areas the Great Grey Owl is considered to be an endangered species. This is due to the drastically reduced number of them over the past couple of decades. Conservation efforts include making hunting or harming them illegal but both of these scenarios continue. There are also plenty of efforts in place to help secure their natural environment.

Studies are in place that are determining what the chances of survival will be for populations of these owls to be relocated into new territories. It seems to work very well when they are in charge of the move on their own.