The Great Horned Owl doesn’t really have horns, but rather ears that are large enough to give that impression. The location of the ears is closer to the middle of the head too than outward like it is for other species of owls. They feature a dark gray coloring combined with dark brown. There are areas of white scattered throughout the body and along the front.

The full grown females are about 25 inches tall. The males are smaller with a size of about 20 inches. The wing span for them can be from 50 to 60 inches.

They have many different types of feathers that are interesting to examine individually. These layers offer warmth as well as the ability to fly gracefully and swiftly. They are considered to be the fastest of all owls in the world. They are able to fly about 40 miles pr hour when necessary. However, they will often fly at a speed around 30 miles per hour.

They have the largest eyes of all owls in the world. This doesn’t mean that they can see any better but it doesn’t help to keep predators away. They do have excellent vision though as well as amazing hearing.

We don’t have very much to go on concerning the evolution of the Great Horned Owl. Most experts believe this is because they are so highly adaptable to their surroundings. Therefore we don’t have fossil remains from them, they were able to change in order to fit well into any given environment. Even so, there are many that still want to investigate the matter further.

What we do know is that owls date back millions of years. From the fossils we have found for other species, they were more than twice the size that they are today. The actual changes in size though significantly vary based upon the species. There are many unanswered questions when it comes to their evolution process and perhaps one day we will have more to share about it with some certainty. 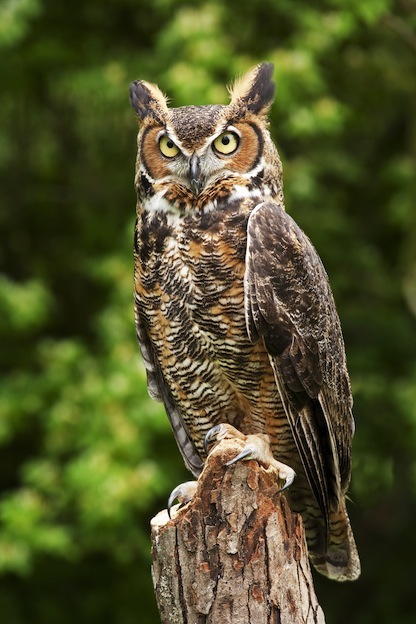 What is the sound that you think of when the owl comes to mind? The who who sound is what you get from the Great Horned Owl. This can be a very loud and long call or a soft and short one. The meaning behind those calls is what determines how they will sound. The males are the most vocal, calling out to establish their territory, to warn predators to stay away, and to find females that they may be able to mate with.

The females will respond to the calls of the males with a higher pitch sound. The chatter can go back and forth for many hours and even of the course of several days before they meet up with each other.

There is quite a diverse habitat out there for the Great Horned Owl. They live in many places where people don’t think about them living such as areas of Alaska. They also find homes in South America within the rainforests. They aren’t picky at all about where they take shelter.

Sometimes it is in the form of trees and other times it is out in the open. They don’t seem to mind humans around them as many live in parks. The tops of buildings, barns, and even Churches are other common locations where you can come across them living.

However, it is important to recognize the fact that a great deal of their natural environment continues to be taken away from them. They aren’t able to fully adapt to these changes in many locations. As a result it has caused the number of them to be reduced and the areas where you can observe them to be thinned out.

When it comes to eating, the Great Horned Owl consumes much more food than other species of owls. They spend many hours each night searching for food. They are very patient when it comes to hunting and will wait until sources of food come out into the open for them to capture. They aren’t afraid to go after prey that is too large for them to swallow. They will simply use their strong beak to tear of pieces that they can swallow.

There are plenty of different food items that they may consume. What the Great Horned Owl has access to really depend on the area where they live. Some of the common ones include rabbits, squirrels, snakes, and possum. Those that live close to water also consume frogs and fish.

Since this species of owl doesn’t migrate, they definitely have to make adjustments with their eating habits. What foods they have available can change based on the season and they seem to be willing to take that into consideration without it being a threat to their overall survival. 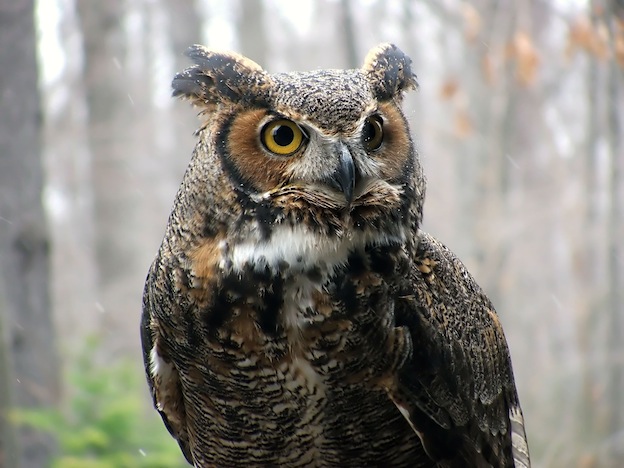 The mating process for these owls starts out with the calls but then develops into much more. Even though they are isolated animals, they will find the same mate again and again year after year. They are able to find each other through the calls that they recognize. The only exception will be if one of them dies or is removed from the natural habitat. At that time then finding a new mate will become a priority for the one left behind. It can take a few years for that to happen though.

After successfully mating, there will be a from two up to six eggs laid. The mating couple take turns tending to these eggs. One will stay with them while they other is able to go feed and to take care of its own needs. The incubation period can range from 26 days to 35 days so the pair has to work as a team if they are going to successfully hatch young while meeting their own needs.

The Great Horned Owls are excellent parents, and they will do all they can to bring enough food for all of the young. When there isn’t’ enough food to go around the biggest and strongest will get fed but not the others. This process will occur for the first 5 weeks of life, and then the young will go find their own place to reside. They have a long lifespan in the wild of up to 30 years.

This particular species of owl doesn’t have too many natural enemies to worry about. What they may encounter often depends on the environment that they live in. Hawks can be a threat, especially to the young Great Horned Owls that have recently left the safety and protection of their parents. More than half of all the young will be consumed by hawks during the first year of life.

Humans are the other major threat to the future for these owls. Many people find them to be a nuisance so they set out poison and traps. Humans also place poison out there to kill rodents but these owls eat them. Those toxins from the prey are released into their bodies and can kill them. Farmers are known to shoot them and some people do so just for the fun of it.