The Long Eared Owl is one that definitely has prominent ears and that is where their name comes from. They are quite thin compared to the body formation of so many other species of owls out there. They are only about 16 inches tall when they are fully grown. The wing span though can cover about 40 inches.

They are a brownish color with some orange to them as well. They also feature spots of gray and white on the chest area. The coloring scheme will actually vary depending on the location where these owls live. They tend to strive to blend in very well to their surroundings for protection.

These owls have quite a large range out there that they cover. You will find them in British Columbia, Northern Mexico, and even in West Virginia. However, these owls do tend to migrate so those found in West Virginia are very rarely there permanently but instead to last out the colder times of the year before returning home.

They seem to really enjoy the pine tree areas and thickets. Where you find such habitats you are surely to find lots of Long Eared Owls in place. They seem to enjoy areas where there are tall grasslands. They will stay in open forest areas too as long as they can find shelter where they don’t feel threatened by other animals that roam during the day.

Most people are in awe of the way in which the Long Eared Owl flies. It is very similar to the movements of a butterfly. They make a hoo hoo sound that they repeat over and over again. This can become quickly annoying to humans that live in the same areas. Around the time they are ready to sleep for the night these noisy owls are communicating. Their sounds can be heard by humans more than ½ a mile from their location. 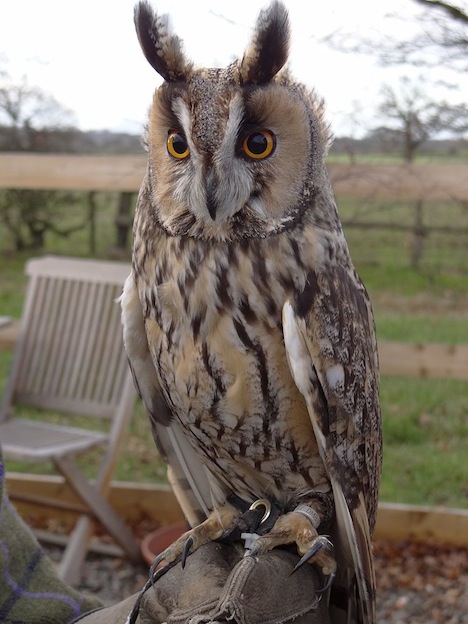 Mice are a very common food source for the Long Eared Owl. They also feed on small rats, bats, squirrels, birds, insects, and snakes. They are very good hunters and they usually are able to find plenty of different types of food out there to select from. They are able to find their food easily even in complete darkness that often surrounds their habitat.

They tend to fly low to the ground which makes it easier for them to get to their prey in a hurry. Their wings are silent so their prey isn’t going to hear them coming and take off running. A quick bite to the back of the neck is all it takes to kill the prey. They can also use their talons to pick it up.

The Long Eared Owls pair off for mating which is one of the few times when they won’t be living alone. The female will lay from 3 to 8 eggs at a time, then incubate them for about 25 days. Her mate will come to her side often, bringing food for her to survive on until she can go hunt on her own again.

The young birds will leave the nest shortly after they are about a month old. They do have one of the longest life spans of about 27 years in the wild. They can live up to 30 years in captivity.

Due to a continuous decline in their numbers they are considered to be a threatened species in the United States. Studies show that the number of them has dropped in California, New Jersey, Illinois, and Iowa. Protecting their natural habitat is key to conservation efforts for them and to get the number of Long Eared Owls to increase.