The Northern Spotted Owl is a lovely looking creature. The body has many shades of light and then dark brown. Intertwined with it are areas of white and cream for an overall appearance that is really amazing. The more you look at one up close the more you will notice all of the details that make it so unique.

There are also patches of white around the eyes that give it a very distinct look. The eyes are large but more of a brown shade than the yellow that other species of owls feature. This is the largest type of owl found in North America. They are about 18 inches tall with a wing span close to 48 inches.

The wooded areas of California is where the most Northern Spotted Owls live. They are also found in British Columbia and Oregon. They like forests that have high trees that serve as canopies for them to fly under. They seem to be in competition though for the same areas as the Barred Owls. This has made it harder for them to get the shelter and food sources that they need for survival. 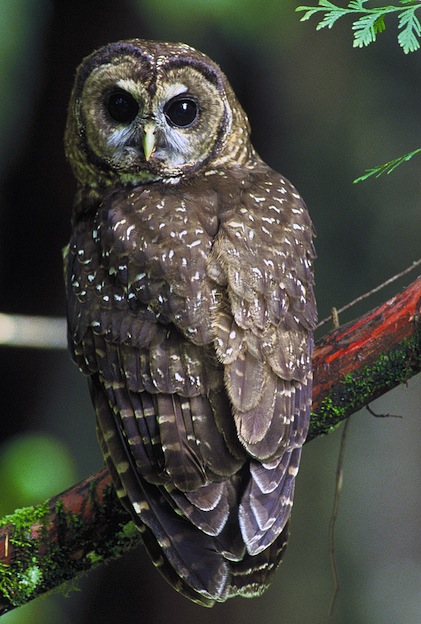 The Northern Spotted Owl is an excellent hunter and that allows it to benefit from many different types of food out there. This includes mice, rodents, reptiles, insects, and even flying squirrels in some areas. They will also eat small birds that they come into contact with.

These owls require quite a bit of food to consume on a daily basis. In areas where their habitat continues to be taken away it is harder for them to be able to find enough of it. When there isn’t’ enough food for them they are less likely to take part in the mating process.

They have a very unique flight pattern that differentiates them from other types of owls. They use rapid movements of their wings to gain speed but when they are ready to get their prey they glide right down over the top of it.

Mating takes place in February or March and then the eggs will be dispersed two months later. The females will have up to three eggs that they offer. It can take up to 30 days for them hatch. During that period of time the male has the responsibility of bringing food to the female.

The young grow very rapidly and within 35 days they have the ability to fly and to go out there on their own. It can be hard though for them to find a territory to call their own. This is vital for them to do soon though if they are going to have a chance to survive. The average lifespan in the wild is about 10 years. It is double that when the owl is in captivity.

There are many conservation efforts out there for the Northern Spotted Owl. The future for them is very uncertain. There are about 200 of them in British Columbia, 2,400 of them in Oregon, and about 1,200 each in Oregon and California. Their natural environment needs to be preserved if they are going to be able to survive and one day be taken off of the endangered species list.