The unique appearance of the owl makes it very distinguishable from other types of birds out there. They feature a very large head and enormous eyes. In fact, some people think they look quite comical. You will notice that they also feature a very sharp looking beak that turns downward. Their enormous eyes do allow them to have amazing vision. They have what we call binocular vision.

Owls actually have a field of vision of about 110 degrees, with about 70 degrees of it being binocular vision enabled. They can turn their heads around and even upside down. It is quite an amazing ability of their anatomy that fascinates people. They also have three eyelids in order to properly protect their eyes. The upper one is for blinking, and the lower one for sleeping. The third eyelid closes from the inside out in order to keep the eyes clean.

Their beaks are very sharp and powerful. They use them as a method of defense as well as to help them with prey. They aren’t able to chew food so they use their beaks to swallow it. With larger prey they will tear it up into smaller pieces that they swallow.

The stomach is in two parts and that is how they are able to digest food. What they can’t digest is then formed into pellets that they have to regurgitate from the body. This process doesn’t hurt them for the balls to come back up. The size of the pellets depends on the species of owl as well as how much they have eaten.

Another reason why people think the owl is comical is due to their head bobbing activities. However, research shows that there is a purpose behind it. When they are doing this bobbing motion they are actually being able to further understand their environment. They have a three dimensional conception of their environment so this helps them to put it all into perspective.

Most species of owls are fairly small sized birds, but they do have a thick and round middle area that makes them seem larger. The females are about 25% larger than the males which is interesting. Generally male birds are larger than the females within the same species. 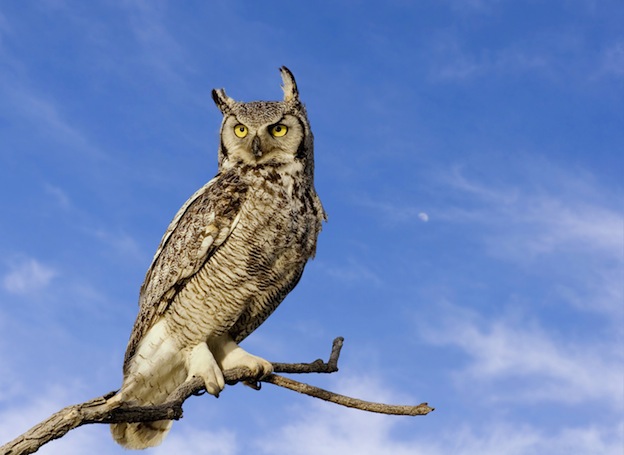 Don’t let the small ears of the owl fool you because they definitely have wonderful hearing. This is a feature that helps them to be able to get their prey with ease. They have very sharp talons that they use to get their prey and for fighting as well.

The wings of an owl are very interesting to explore. Behind the head they have the lesser wings and then behind them are the median wings. The greater wings are in the back with the primary and secondary feathers underneath. They have five different types of feathers which allow them to be protected, to feel their surroundings, and to fly without making a sound.

You may find it hard to really spot owls out there even though you can hear them. This is because their bodies are designed to blend into their surroundings. Their coloring can change in order to adapt to the different seasons in their given environment.

The overall anatomy of an owl certainly allows it to do very well in its own natural environment. There is no doubt that these amazing animals have successfully been able to go through various types of evolution in order to have the body design that we see today. Many experts believe that it is their anatomy that has allowed this type of bird to be able to survive in our ever changing world.