The owl is a very fierce and powerful hunter so most of the time they capture their prey. They will only consume live animals so if they come across remains that someone else has killed they will leave it alone. They have an instinctive drive to find their own prey and it seems that the satisfaction of the kill is just as much a part of it as the actual need to consume their prey for survival.

Owls have exceptional vision that make it very easy to find prey. They are able to swoop down on it quickly and the element of surprise is on their side. They have talons which are extremely sharp. This is how they pick up their prey.

The diet for owls depends on the location where they live. They are very versatile and they will take a meal when they can without being too picky about it. As a result they seem to be able to do very well in a variety of different environments. The seasons of the year can affect the access they have to various sources of food as well.

They tend to consume lots of different types of invertebrates. This includes spiders, insects, snails, crabs, and earthworms. They will also consume fish, small reptiles, small amphibians, various types of smaller mammals, and even other birds.

Rodents including rats and mice are common food sources for the owl. Rabbits also tend to be plentiful in many of the areas where owls live. Yet the rodents can be harder to get to when it is cold. They tend to burrow underground to stay warm. During those times the owls will have to rely upon other sources of food in order to survive.

Owls tend to be very patient hunters. They perch above on trees and ledges, looking below for their prey. The combination of keen hearing and vision allows them to pick up on movements even when it is completely dark in their surroundings. Then the owl will take flight and capture the prey in a split second. 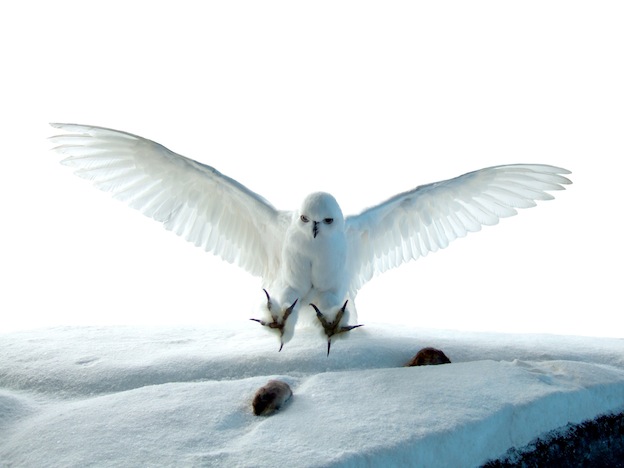 An Owl capturing a rodent

The force from the talons is enough to often immobilize the prey which is why it won’t offer too much of a struggle as the owl flies somewhere to consume it. They may even swiftly transfer the prey from the talons to the beak and consume it within seconds of capturing it. This process all depends on the species of owl as well as the type of prey it has captured.

The amount of food that an owl needs to eat daily depends on the species and the size. It also depends on the size of the prey. They often go for larger prey so they don’t need to hunt as much. However, they will take small prey when it is offered so that they don’t risk having to do without any food at all.

They swallow food whole instead of chewing it up. When they do capture larger prey they use the beak to tear it into pieces that they can swallow easily. They don’t have a crop as other birds do though that stores food for later one. Instead, it all goes immediately to be digested.
Owls regurgitate pellets after they have been eating. In these pallets are a variety of items that their bodies can’t digest. They include crushed up bones of their prey, fur, and feathers. It takes about 10 hours after eating for such pellets to form and to be regurgitated by the owl.

The pellets have to be removed from the body before they are able to consume more prey. The eating habits of particular species of owls in various areas have been carefully studied through exploring the contents of these pellets.