Owls are well known as being very versatile birds when it comes to their habitat. They are able to live in a variety of locations and some of those may surprise you. The most common place to find owls living is in wooded areas. They have a place to call their own territory and where they can hide during the day from predators. They also have access to lots of different food sources because of the other living creatures in the forest.

There are some species of owls that are able to live in the rainforests. They do very well with the humidity and the rainfall. They are able to find great places to live that protect them from their environment. However, the trade off is that they seem to have more predators that they need to hide from or to protect themselves from.

It may surprise you though to learn that some owls live in the grasslands and the open prairie. They are able to find lots of food sources in these areas. They don’t seem to mind the heat either because they are sleeping and in cool shaded areas during the day. The Elf Owl is one that is able to live in the desert and they are found out there with the cactus.

Some people assume that owls only live in trees. However, they take any opportunity that they can to find shelter and to stake a claim on an environment out there. For example they can live in tree trunks and in the tops of barns. Others live in shrubs and bushes where you would never think to look for them. These birds don’t have to be high off the ground as most people think.

That misconception often comes from the fact that they perch up high to find their prey. However, they move from their nesting location to find their prey instead of using that location for their hunting. Owls will use any type of hollowed out log or opening in a tree for a nesting area. They also take over the nests that other birds have left behind. They never create their own nests from scratch.

The threat for the future with many species of owls though has to do with the fact that they may one day lose too much of their habitat for survival. Even though most owls have proven to be highly adaptable there is a limit to what they can do. They are usually isolated animals and very territorial. Therefore there is simply not enough room for them all to go around. 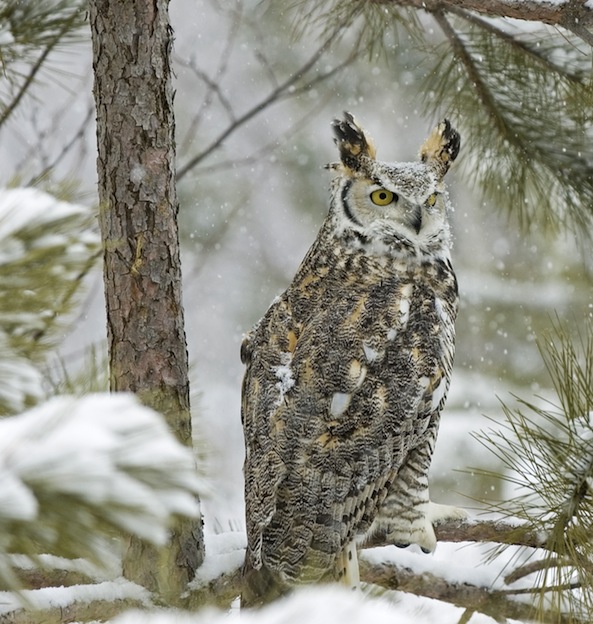 The fact that they need enough food for survival is a problem too. In any owl habitat the lack of food due to humans disrupting the environment can lead to death. Most species of owls also won’t reproduce at high rates when their basic needs aren’t met. As a result, there are plenty of types of conservation efforts in place for the natural habitat of owls.

One way that humans have helped owls to have a habitat is through the creation of nesting boxes. They are made in a fashion that attracts the owls and that they feel safe in them. For example in areas where trees that the owls would normally live in are cut down for wood supplies, these nesting boxes are put into place. That way the owls don’t have to feel that they need to leave the area in order to survive.
While it isn’t the ideal solution it is a step that acknowledges that these owls need to be protected. It also helps to prevent the numbers of them in the wild from dropping. There is plenty of research about owl habitats and how we can protect them.