The Screech Owl is a very small species with a size of no more than 10 inches in height. However, they have a wing span of about 24 inches. They are often confused with other types of owls though. This is because they have a red color at one point in their life and then gray at another. It isn’t understood why this occurs though. It is believed that it has something to do with their environment.

They have feathers on their talons to help to keep them warm. They have very thick feathers on their body. On average there are 70 feathers per square inch. There are 21 different sub species of the Screech Owl in the world, so the overall look and size of them can vary depending on which category they happen to fall into.

The Screech Owl is mainly found in the Rocky Mountain areas. They tend to live in a variety of different environments out there in this area though. They include the woods and suburban areas. This is why the Screech Owl is considered to be such a nuisance by many people. These owls seem to not mind at all being very close in proximity to humans.

The name of this owl definitely says it all. They have a screeching sound that they offer which is very unique from the calls of other types of owls. The males are extremely territorial and they will fight to ensure that others don’t try to come into that area. They are loners with the exception of when they are looking for a mate. This can start to take place in the later part of winter.

These owls love to wash their bodies so they can be found in areas of rainfall doing so. They will also go to the backyards of humans in order to be able to bathe in the birdbaths there. Clicking sounds are often heard coming from these owls when they feel threatened. 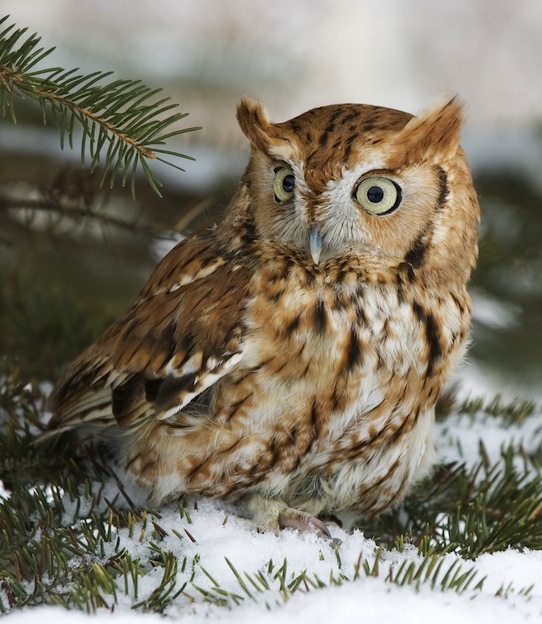 Mice seem to be the most common type of food source for the Screech Owl. They also consume lots of small insects including spiders, worms, cockroaches, bats, and lizards. They can spend many hours every night looking for food and consuming it.

The Screech Owl can lay from 5 to 7 eggs at a time. They will offer one or two initially, wait a few days, and then lay more. This allows the eggs to also hatch at different intervals. The male will go to find food while the female stays behind to care for the eggs in the next. The incubation period is about 26 days.

The oldest of the youngsters are the ones that will get the most food from the parents. The survival of the fittest is the way of nature for these owls, especially with larger numbers of young at once. At about six weeks of age the young are ready to leave the nest and to care for themselves.

The females are very protective of their young offspring. It is often that these mothers will lose their own lives in efforts to protect the young from predators. They will take on predators that are several sizes larger than themselves if necessary.

Even though there are so many different sub species of the Screech Owl, many of them are in danger due to low numbers. As humans move into their natural surroundings, they find that they have less and less room to find shelter and for hunting to take place. Protecting their environment is very important. The use of nest boxes has helped with keeping them productive in many locations.