As you may have guessed, the Short Eared Owl doesn’t have very long ears at all. Yet they can hear very well from them. They are small owls with an overall size of 13 to 17 inches when fully grown. The females are several inches taller than the males. They range in color from shades of gray to shades of brown.

These are very versatile owls, and so they are known to spread out from their natural distribution areas when they need to. In times when food or shelter is hard to come by their survival instinct will kick in and they will relocate to where they can get those needs met.

This is one of the few species of owls that are known to spend time together for long periods of time. They can form colonies that are on the ground and they will live with each other in harmony. Since most species of owls are isolated and territorial this is quite a significant event to watch.

The Short Eared Owl doesn’t seem to be easily scared off by humans. That is one of the reasons that it has been observed in such detail when others aren’t.

Almost all of the diet for the Short Eared Owl is mice. They will also consume small amounts of small birds and shrews. They rely upon their vision and their eyesight to be able to be very aggressive predators with a high success rate. 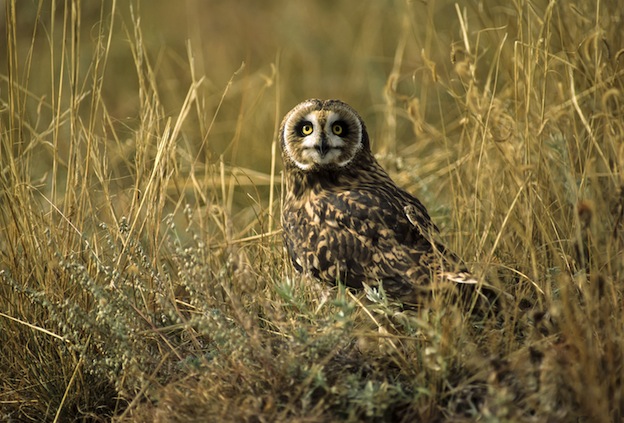 The males are going to be showing off for the females before mating and it is very interesting to watch. They will fly around in a variety of different patterns that often look like they are a plane at an air show. This is believed to be done due to the fact that this species of owl has a hard time identifying each other by appearance alone as to what sex they are encountering.

The females can lay more eggs than most other species of owls. Usually she will offer 7 eggs but can leave up to 14 of them in the nest. The female will spend about 23 days keeping here eggs safe and warm. Her partner will venture out for food for himself and to bring back to her. They will both care for the young for about six weeks before they leave the nest for good.

They have a very short life span in the wild of about four years. They can live up to 10 years in captivity. One of the problems for them is that they consume prey that has been exposed to various pesticides. These toxins build up in the owl’s bodies and kill them.

In spite of the fact that the Short Eared Owl is able to adapt to new environments, there is a limit to where it can go and the types of changes it can adjust to for survival. There are reports that show a steady decline in population of about 3.5% annually for the past 10 years.

As a result of this there are various conservation efforts in place. Most of them revolve around trying to reduce the instances of humans moving into the territory where these owls live. Yet such efforts can be hard to gain results from as many humans are more interested in their own gains than the future for these animals.