The unique look of the Snowy Owl means that this species is never confused with any other. It is the only one featuring an all white coloring. They also have speckles on the body that are dark gray or black in color. The size of the speckles as well as the pattern of them can be very different for each of them. The females seem to have more of the markings and in a different coloring.

The overall body of the Snowy Owl is designed to allow it to stay very warm in the colder regions. This is why it has a very thick middle section. It also has fur on the talons that help it to retain body heat. They are about 24 inches tall when they are fully grown. The wings are amazingly detailed and can span about 60 inches.

They have very large eyes that help them to be able to adapt to a variety of changes in their environment. Even though they have very small ears they have amazing hearing that is better than most animals out there. They may be small animals but they are very strong and very aggressive.

The fact that the Snowy Owl is the only species with this white coloring gives the impression that it is due to the evolution process. At some point in time this species of owl ended up in the very cold regions. In order to survive it had to develop thicker feathers than other species. It also needed a coloring that wouldn’t stand out in the surroundings. Other species of owls are brown and grey but that would be to evident against the snowy background.

There are fossils out there dating millions of years ago that indicate owl species have been around since that time. However, it isn’t fully understood how they are linked to the Snowy Owl. The remains that have been found don’t show that this species was around back then. Yet they may have been and we just haven’t found those remains yet.

As a result there is an ongoing debate among experts about how the life for the Snowy Owls began. Were they the result of another species that moved into that colder region for some reason? Instead of dying out though some of them were able to evolve, survive, and to reproduce? 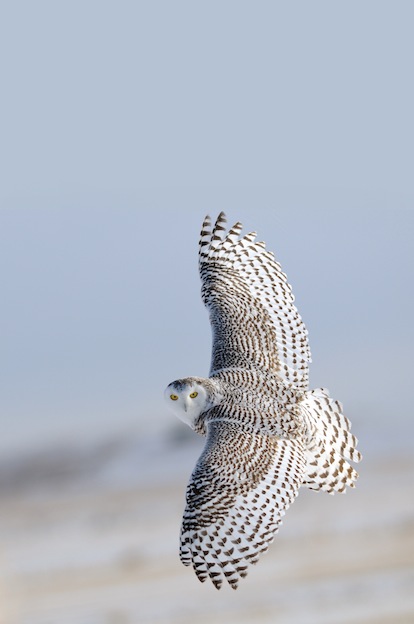 The Snowy Owl is known to try to hide in its surroundings which is why they white coloring is able to help it do so. Some people believe that this species of owl doesn’t make any sounds. It does, but it is very infrequent when you will actually hear it making any types of noises.

About the only time you will hear them making noise is when they are trying to attract each other. The males are the ones with the deep voices and they often start the process of calling out to the females. When they respond they have a high pitch sound that is heard.

It is hard to imagine any type of owl being able to live in Alaska on the frozen tundra. Yet that is exactly the location where you will find them living. Some people assume that they migrate in the winter time to escape the cold but their bodies are well adapted to such an environment. They do migrate but the process takes place so that they can find enough food for survival. This is why they are sometimes spotted in areas of California during the winter.

Most of the time you will find the Snowy Owl in the open areas but they can be in the forest in Alaska as well. They are very loyal to their environment by instinct for survival will drive them to move around if they need to find better shelter or an area that offers them more food.

The Snowy Owl has many different types of food that it will consume. They know in their area that when they have an opportunity to get food they should take it. In fact, this is one of the few species of owls that will store up kills for eating later on. Generally, owls will only eat food as soon as they kill it.

There are many different types of mammals small enough in size for the Snowy Owl to easily control them. They rely on their hearing and their great vision to help them find prey. They can see it moving, and they can hear it moving. They can pick up on movements under the snow too and dive in to get their prey. They are very quiet in flight too so their prey really never knows what is going on until it is too late.

When the temperatures are somewhat warmer in Alaska the swans and other types of birds can spend their time on the water and the shores close by. During this period of time the Snowy Owl will take the opportunity to consume the eggs these types of waterfowl have left in nests.

Since there are periods of time in Alaska during the summer when it doesn’t get dark the Snowy Owl has no choice but to be a daytime hunter for that span of time. This can be hard for them to adjust to because they are nocturnal by nature. However, they seem to know that they have to go out at certain times to find food if they are going to survive. They are often more vocal during these days of light too due to the changes it creates for their environment. 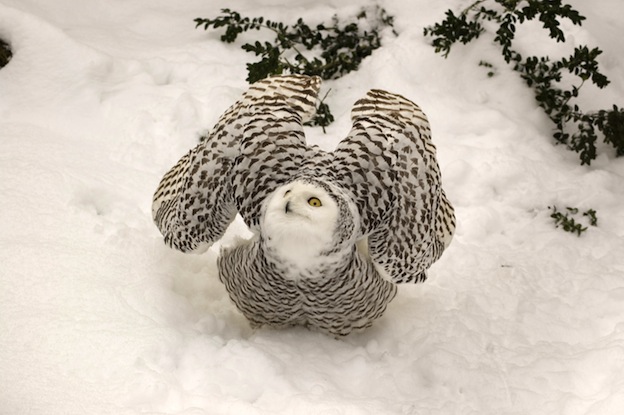 The frozen tundra is where the eggs of the Snowy Owl will be laid. The females can have as many as 8 eggs at a time but 5 is the most common number. The female will stay with them for a period of 30 days to keep them warm and safe from predators. The male does his part by bringing her food and helping to stand watch over the area to keep predators away from them.

When the young owls are a couple of months old they will have to leave to find their own home. It can be very hard for them to establish a territory due to the fact that the natural environment for these owls continues to be taken away. The first winter for a young Snowy Owl can be very harsh. In order to survive they must have shelter and a place where they can easily hunt.

Even though the Snowy Owl lives in isolated areas they do have some predators to worry about. This includes the fox, wolves, and wild dogs. As other food sources for these predators becomes hard to find they will turn more and more to the Snowy Owl to fill their bellies.

Humans happen to be the biggest predators of the Snowy Owl. Due to the delightful appearance of them it is a thrill for them to be hunted and then mounted as trophies. In some cultures the meat of these owls is considered to be a delicacy. Others are hunted for their lovely feathers that are used to make different types of clothing.