The Tawny Owl is medium in size and is very round in shape. It has a  large head with deep set eyes. The coloring is a rusty brown that have both light and dark shades. When you see one you will instantly think of a piece of wood due to the coloring of it. This is part of their overall camouflage that allows them to easily blend into their surroundings.

They end up being about 17 inches when they are fully grown. They also have a wing span of about 40 inches. The females are fuller and longer than the males. The face is rounded and there are small ears on the top. You will notice that the wings are rounded on the ends which is a different design from other species of owls.

Most of the Tawny Owls out there live around the area of Eurasia. This area spans from Great Britain to the Iberian Peninsula. They are also found in areas of Iran, Korea, and the Himalayas. A small number of them have also been found to be living in the Canary Islands.

They are found in various forest regions and love to be among the conifers. The do like to be in areas where they have access to water. They are also found in parks and garden areas in communities. It also isn’t uncommon for them to be found around cemeteries which is another reason why they are often associated with death.

The sounds that come from the Tawny Owl are often believed to be haunting in nature. This is why this particular species of owl is often considered to be one to bring bad luck or even as a sign of death in some cultures. They don’t want to have these types of owls around due to the fact that they believe they are part of evil that is lurking on Earth. 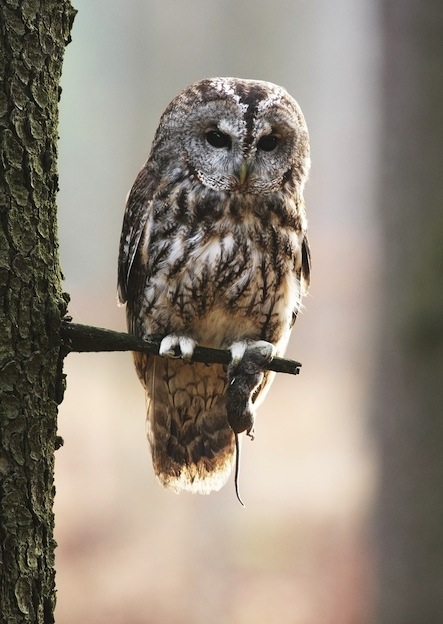 Rodents make up the majority of the diet for the Tawny Owls. They have huge appetites and can easily consume ten of them per day. This is why many areas where rodents are a problem have introduced these owls to the area. They are a free source of controlling the problem without harmful poisons. Small birds are also a common part of their diet.

They do have wonderful eyesight but it is their hearing that helps them to be able to find their prey in the dark. They are excellent hunters with silent wings so they have no trouble at all sneaking up on their prey. With sharp talons they will grab it and then either swallow it whole or use the beak to tear it into chunks.

The mothers are extremely protective of both their eggs and the young offspring. The will fiercely fight with their mate as well as with any humans or animals that come into that territory.

The young have a difficult time when they venture out on their own of finding a territory that they can stake a claim to. The Tawny Owl is extremely territorial which means that they don’t do well with intruders coming along. The parents of the offspring don’t allow them to stay in their territory either once they are able to fly.

There isn’t very much out there in the way of conservation for the Tawny Owl. They are being watched and right now they are considered to be on the least of least concern when it comes to these animals. Yet we do need to take notice of the way in which their natural habitat it being destroyed. Otherwise we will see them on the list before we know it.