The Verreaux’s Eagle Owl is one of the largest species of owls in the world. In fact, it is ranked as number three out there with only the Eurasian Eagle Owl and Blakiston’s Fish Owl being larger. They are approximately 30 inches in length as adults. The wing span can be more than 6 ½ feet. Thee wings generally will weigh about 7 pounds.

They feature various shades of brown with the darker colors being towards the ends of the feathers. The chest area and some of the face are a creamy white color that blends in very well with the brown shades. They have a distinct feature of pink eyelids which no other species of owl has.

Africa is the main area where you will find this particular species of owl. They tend to do very well in the tropical rainforests. They are also doing well in the Sub Sahara areas. Due to their need for moisture, they aren’t found in the desert areas.

Generally, the Verreaux’s Eagle Owl perches in very tall trees. They also are found in ravines along the Savannah. Some of them are also living in the open woodland areas.

It is true that you may here these owls in the daylight hours. They aren’t really active during that time of the day though. Instead, they seem to be very light sleepers and they will wake up if they hear noises around them. They make sounds at that time to warn that they are in the area and to aggressively defend it.

They make deep grunting sounds which are often mistaken for some other type of animal in the area. The fact that they sound very different than other species of owls is why they aren’t readily identified. 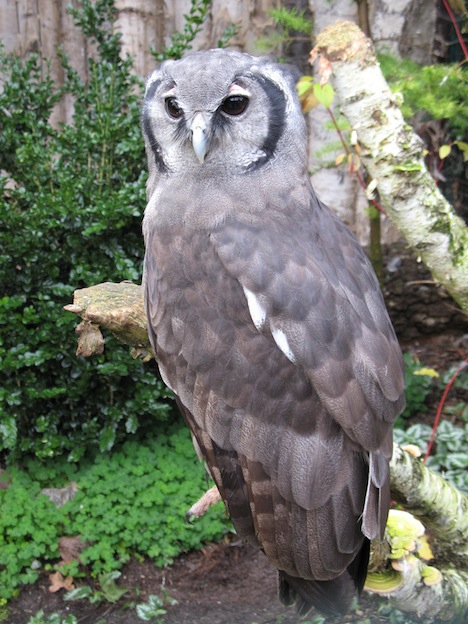 Due to the large size of the Verreaux’s Eagle Owl, they need to consume larger types of prey than other species of owls. Their diet consists of rabbits, mongoose, and plenty of types of small game. They also consume rates and pigeons if they are readily available their area of residence.

They have been known to consume small monkeys and hedgehogs in some areas. It really depends on if those types of prey are available or not. The evidence has been found in the pellets that they regurgitate. This has the bones and fur of their prey that they weren’t able to digest.

These owls have a very long breeding season. It lasts from March until September. The females will usually have two eggs but sometimes only one. They will incubate them for about 28 days. She will remain with the eggs from the time they leave her body until they hatch. It is the job of her mate to bring her back enough food for survival.

The first egg to hatch is the one that is the most likely to offer offspring to survive. The parents will feed this one immediately and continually. If they have enough food available they will feed both of the young. However, if food sources are scarce the second one will get no food at all. Sadly, it will die within a day or two.

These young can fly when they are about 9 weeks of age. However, they often linger with the parents for about another 3 weeks before they go out on their own. The additional time with their parents allows them to learn better hunting skills. It also helps to keep them safe from predators.

The Verreaux’s Eagle Owl doesn’t seem to be in any jeopardy at this time of becoming endangered. There are some concerns in some areas about their natural habitat being consumed by humans. Overall though they do have a good population that most experts believe will continue to do very well.